Through the Looking Glass – A Chess Event was an absolute hit.  It was an honor to be invited to host this during the annual ‘Taste of Park Royal’. One for the chess history books at Park Royal for sure.

HUGE THANKS TO: Park Royal Management for putting on this spectacular ‘chess event’ July 8 2017.  We simply put the boards out and over they came to play. Parents with children, men women teens, girls and boys. It was clear to Dan and I that we couldn’t interrupt the games in order to play a large simul, and that people just wanted to play chess. So we all played. The afternoon of chess continued until near closing 7:00 pm. Not an empty seat at the tables. 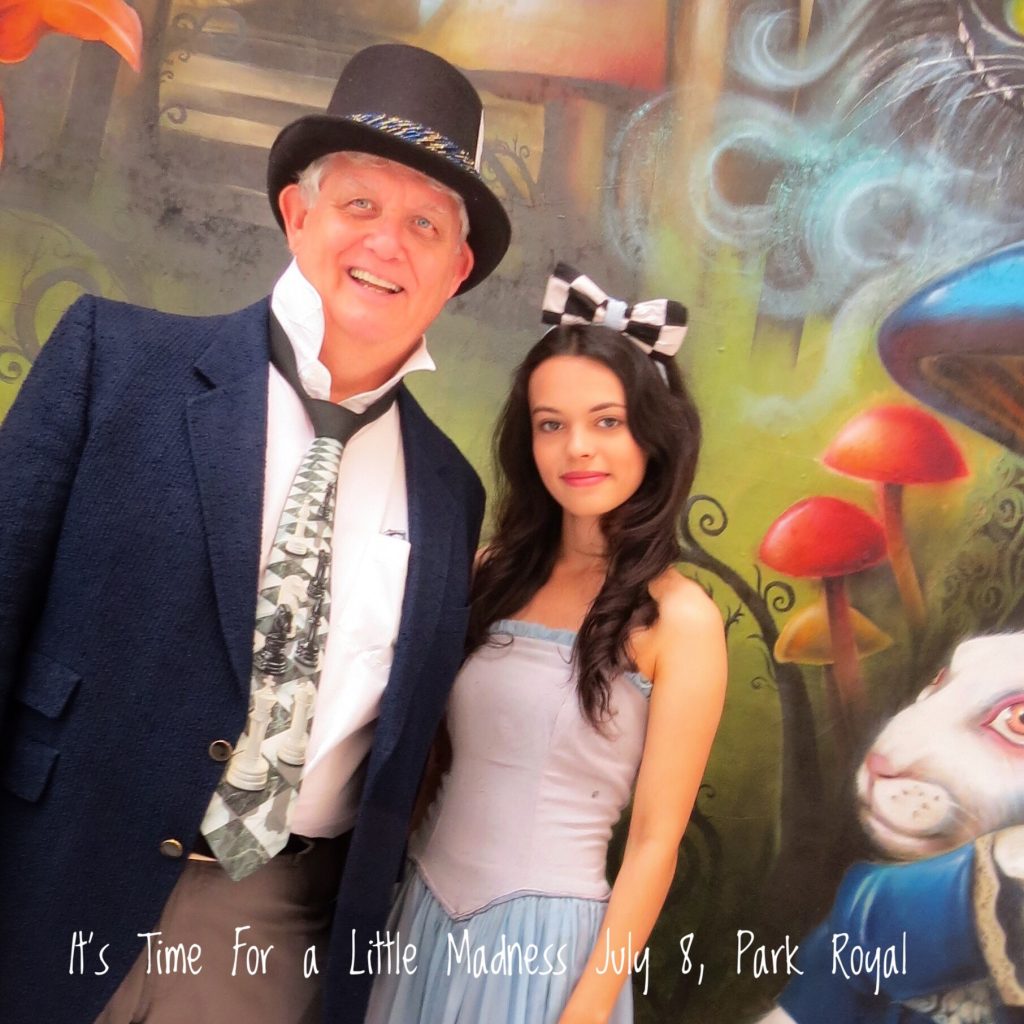 HUGE THANKS TO: Master chess champ DAN SCOONES for his mad hatter chess moves and excellent hosting skills. It wouldn’t have been the same without him. Stellar performance, charm and high energy stole the show throughout the day.

HUGE THANKS TO: Pedram Amani and his mother Zahra. Both for excellent chess skills and amazing hosting. Pedram is my class mate. He runs the chess club with me and is organizer of scholastic chess in West Vancouver.  He is also a physics genius, and came 1st in Canada. Pedram is off to a world competition this weekend in Indonesia. Good luck Pedram! He is a 1st year university student and plans a career in experimental physics. You guessed it Pedram wants to play more chess. Makes total sense, and he is good.

HUGE THANKS TO: West Vancouver Secondary School Chess Club and Sentinel Chess Club for letting us use their chess boards. 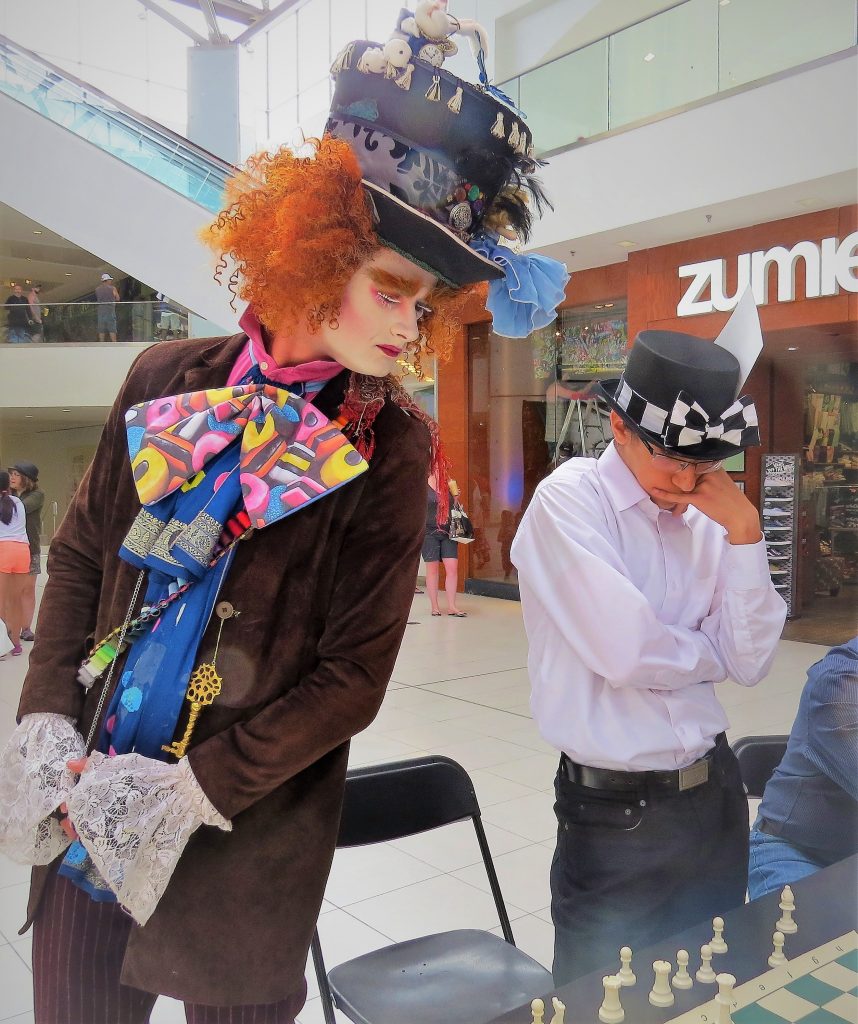 Pedram Amani and the Mad Hatter from The Vancouver Circus School 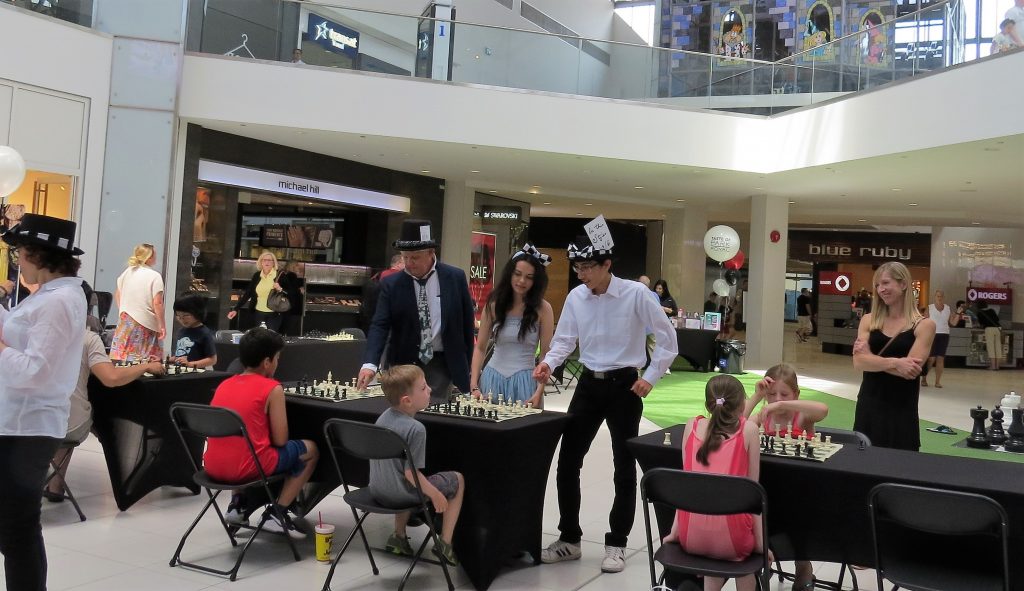 MANY THANKS TO The Vancouver Circus School for being there. Amazing THROUGH THE LOOKING GLASS talent. The characters had a photo booth offering the public free photos taken with them. Some skillful moves demonstrated on the boards. 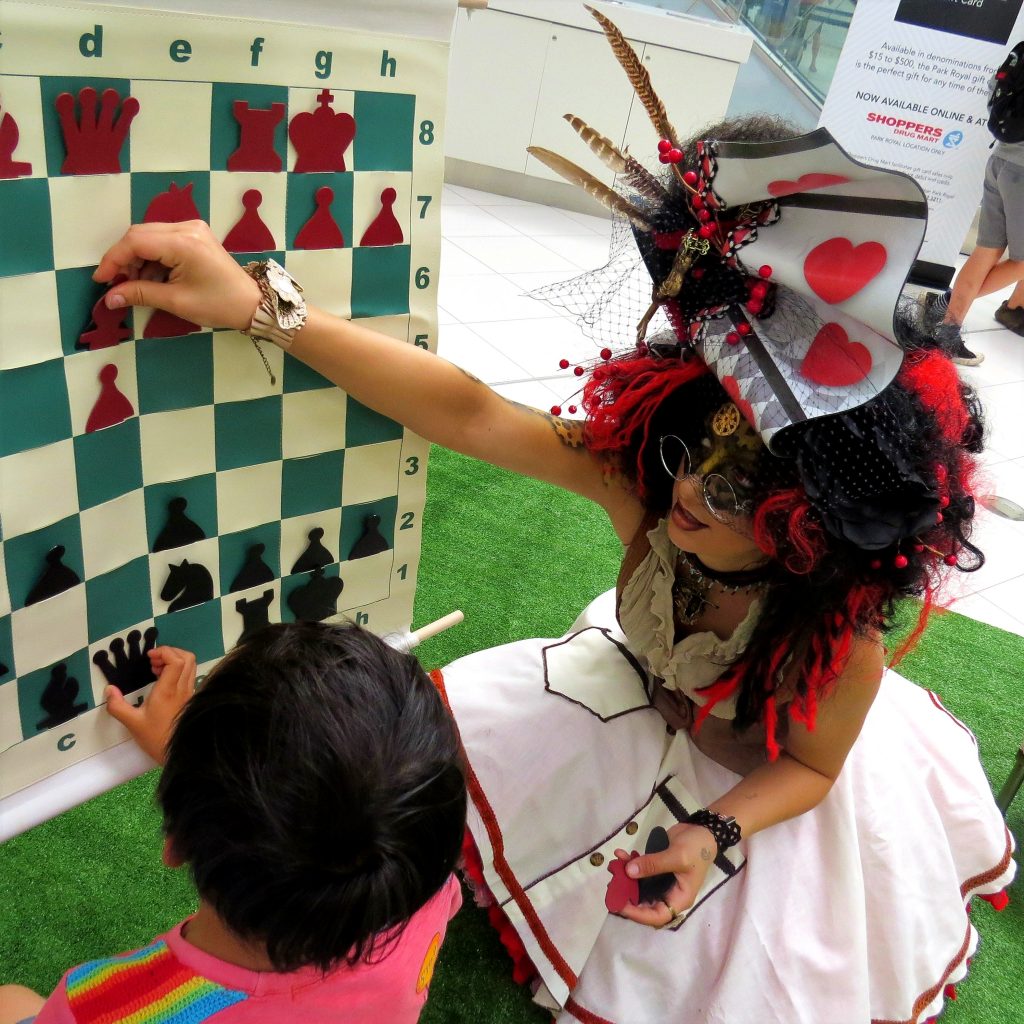 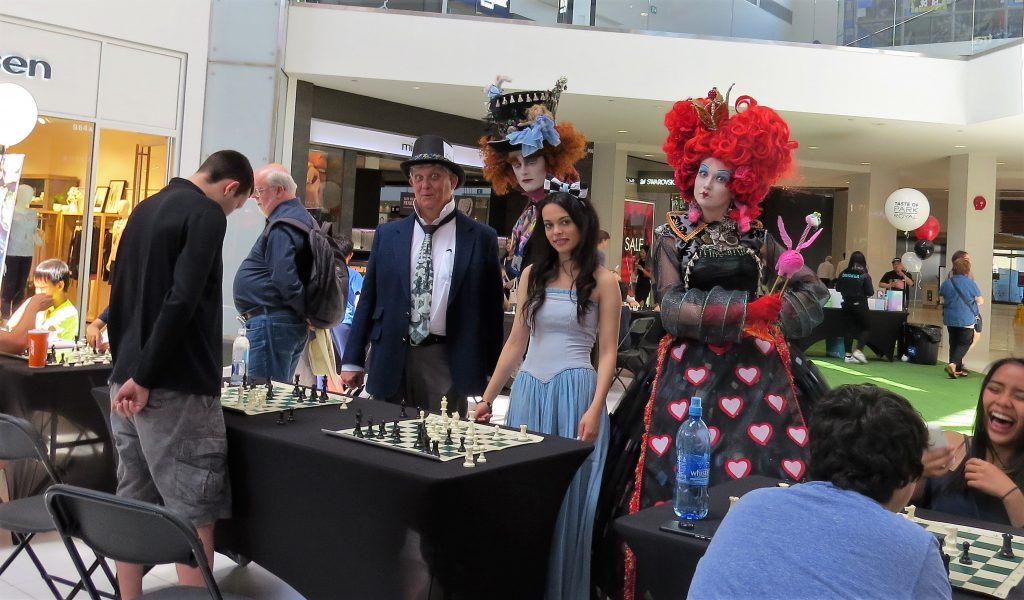 A Mini Simul with a Russian Chess Master

However mad hatter Dan pulled off a few ‘out of this world moves’. Naturally!

Check out the laughing girl on the right of the picture above and below, ha ha. More chess madness!

What a great host you are too Jacob! 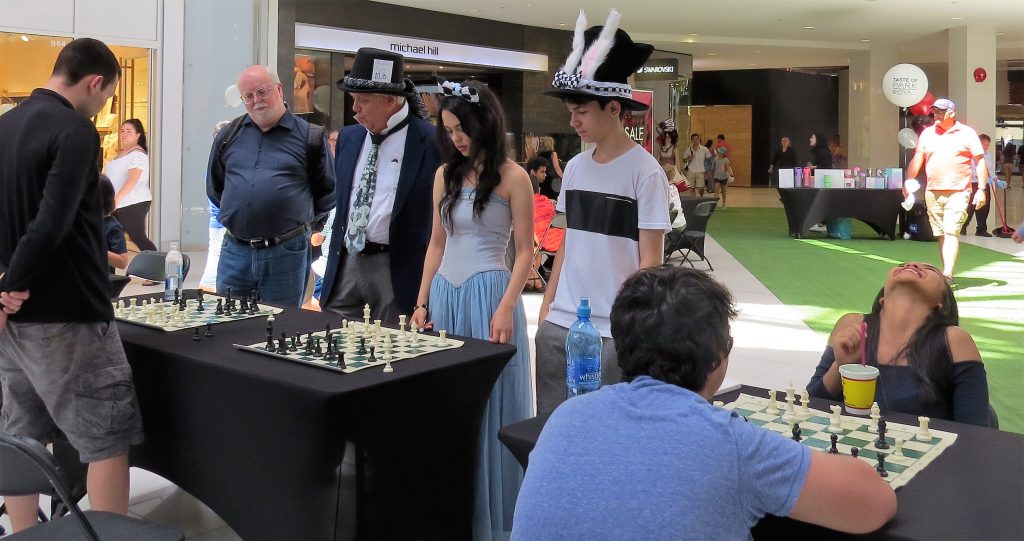 for her organizing this event. Unbelievable talent.  Huge love and hugs! 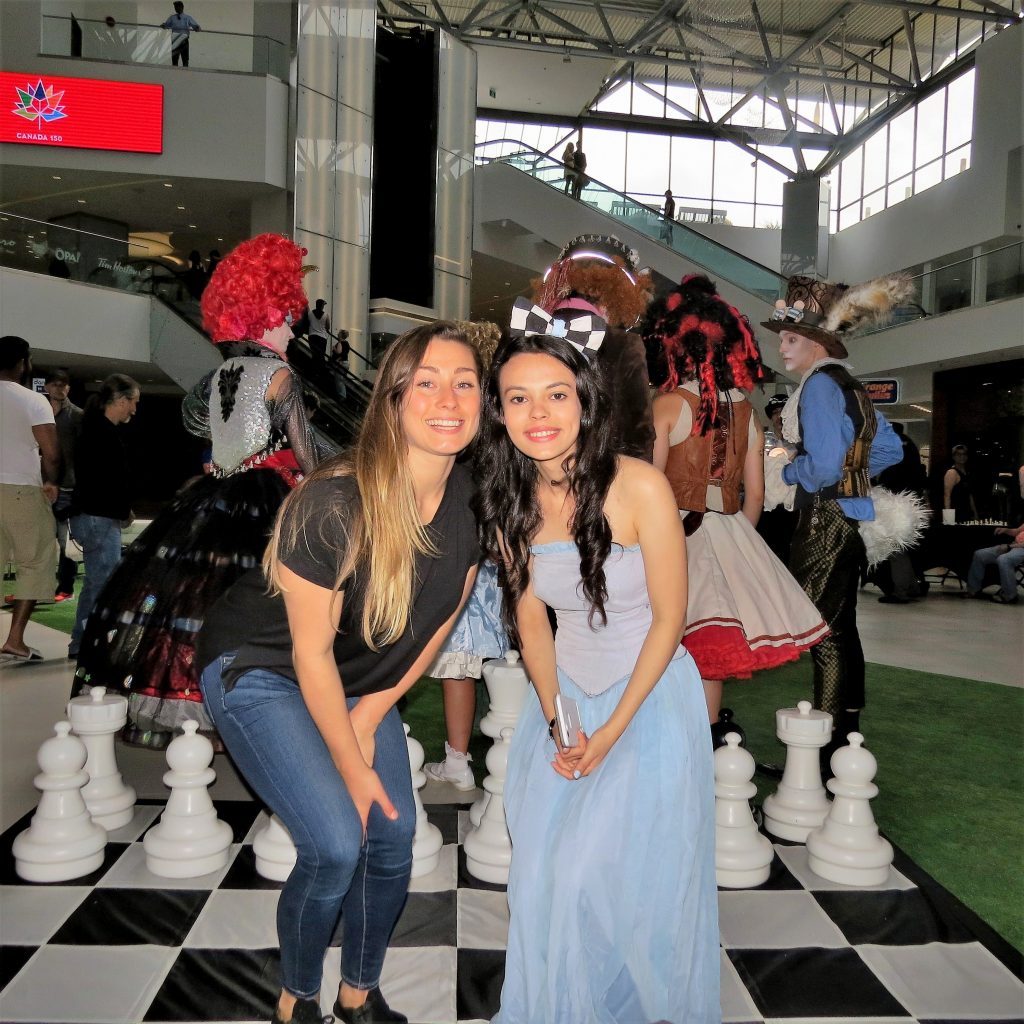 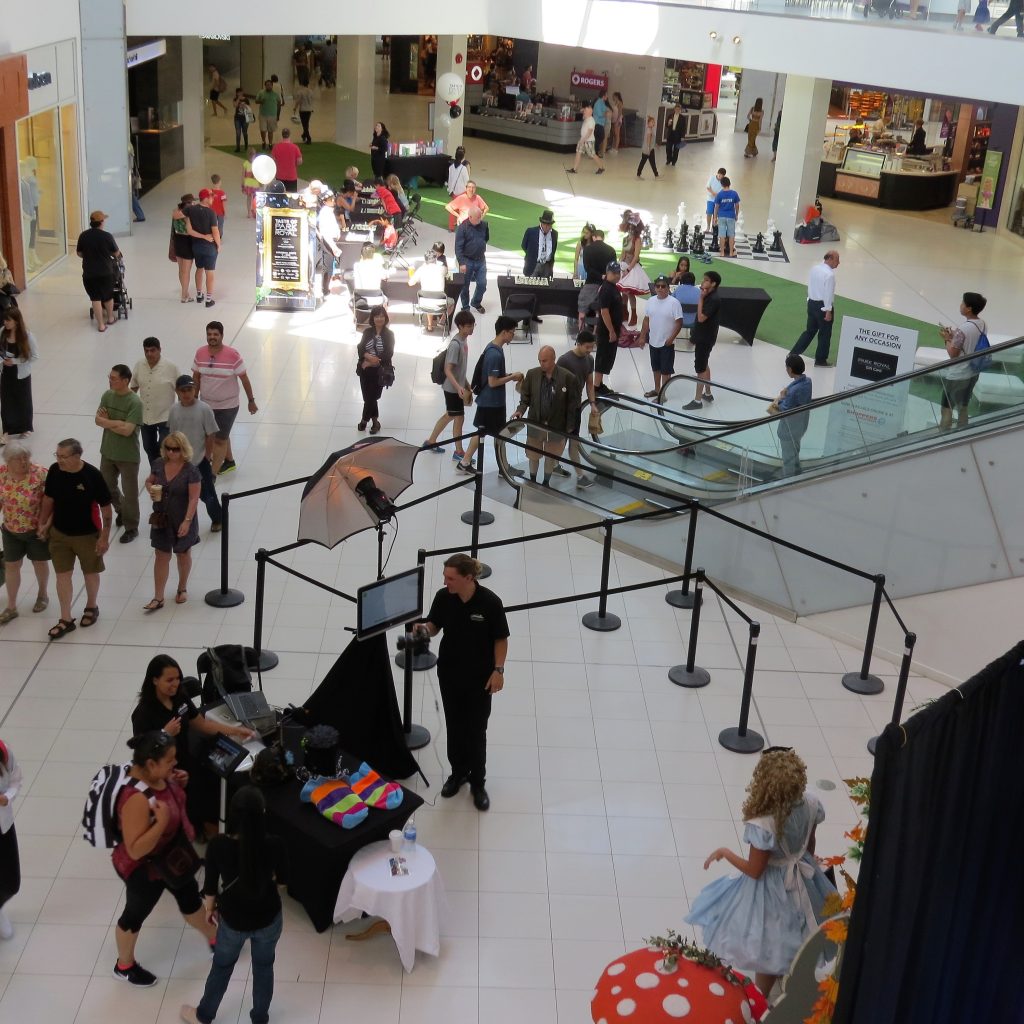 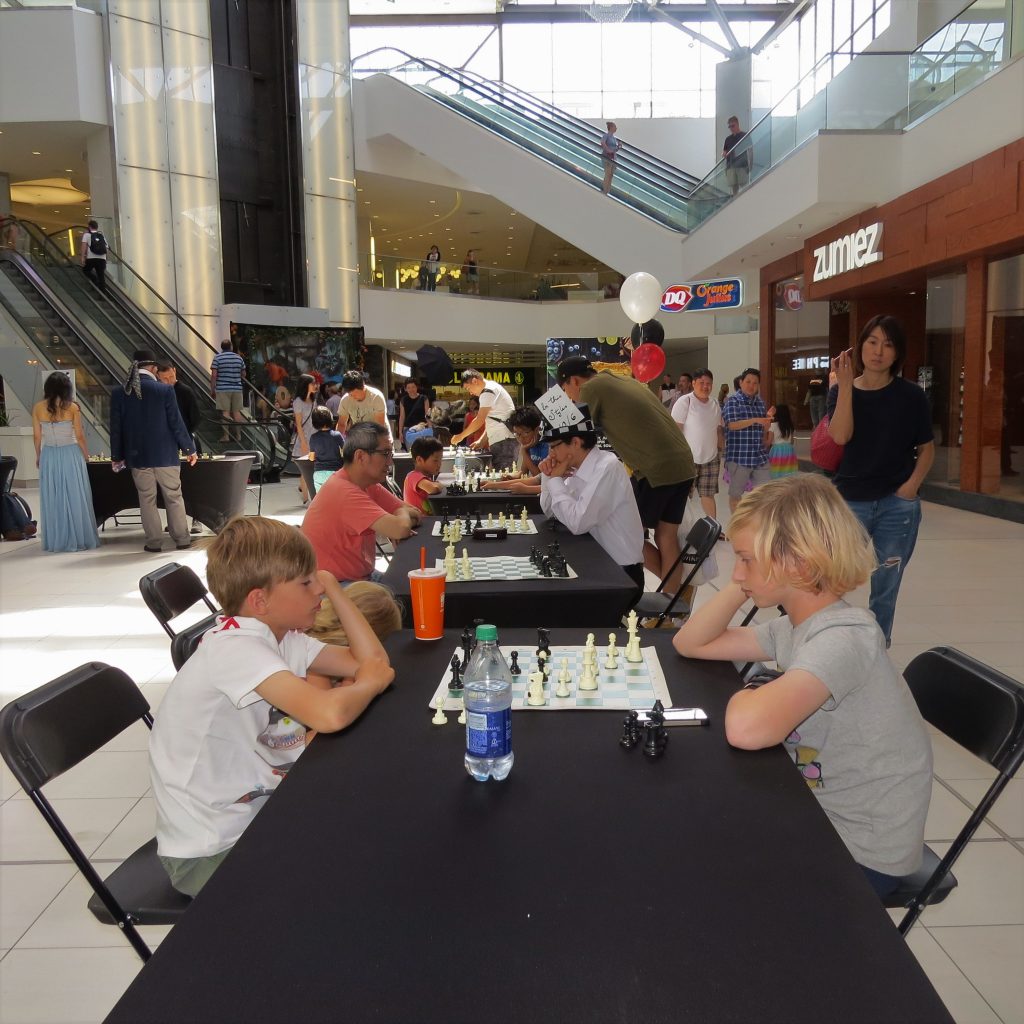 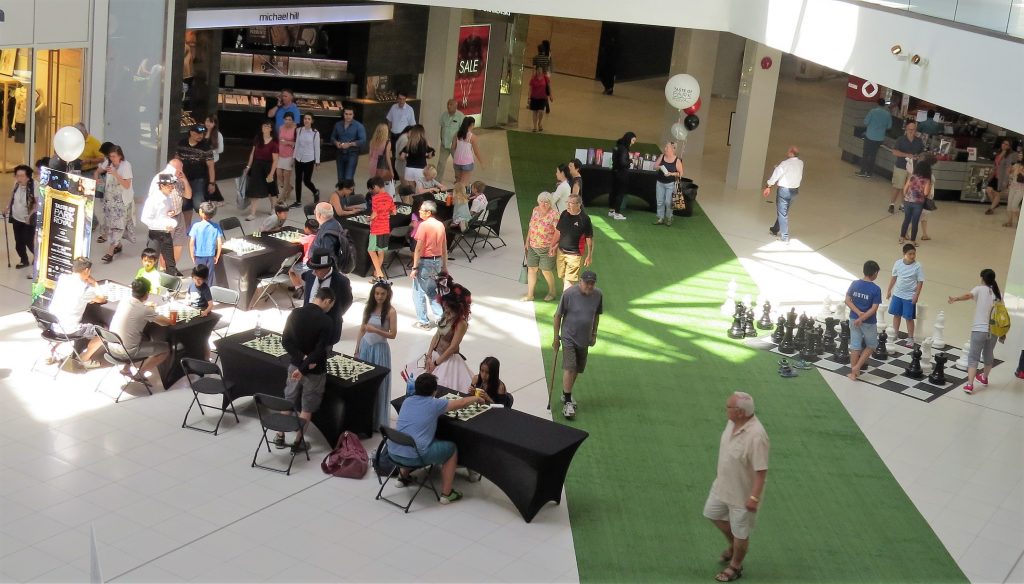 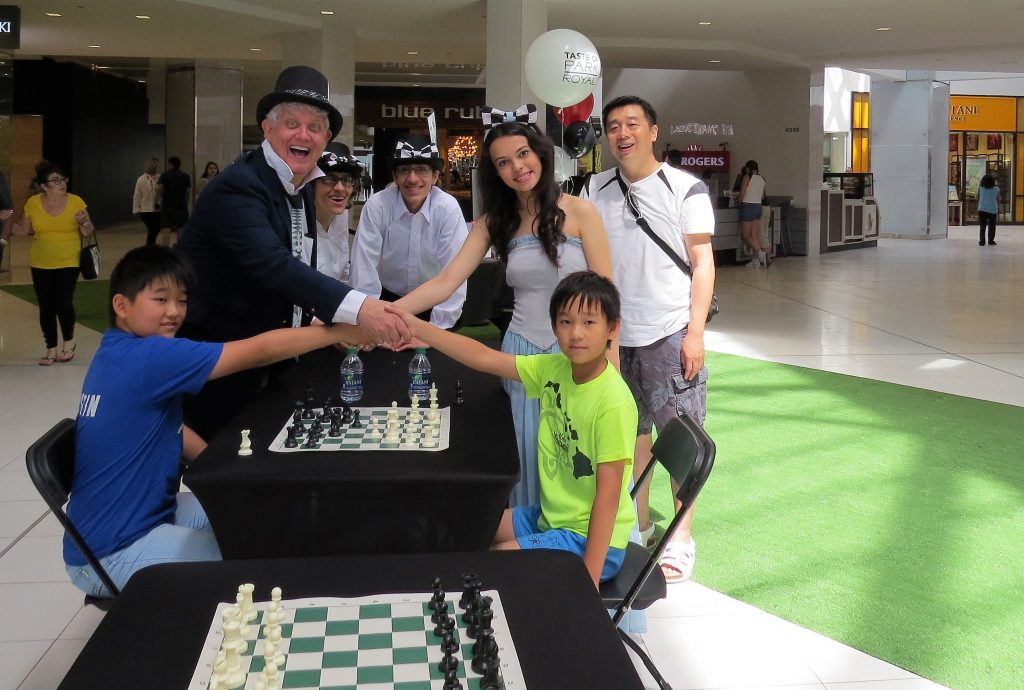 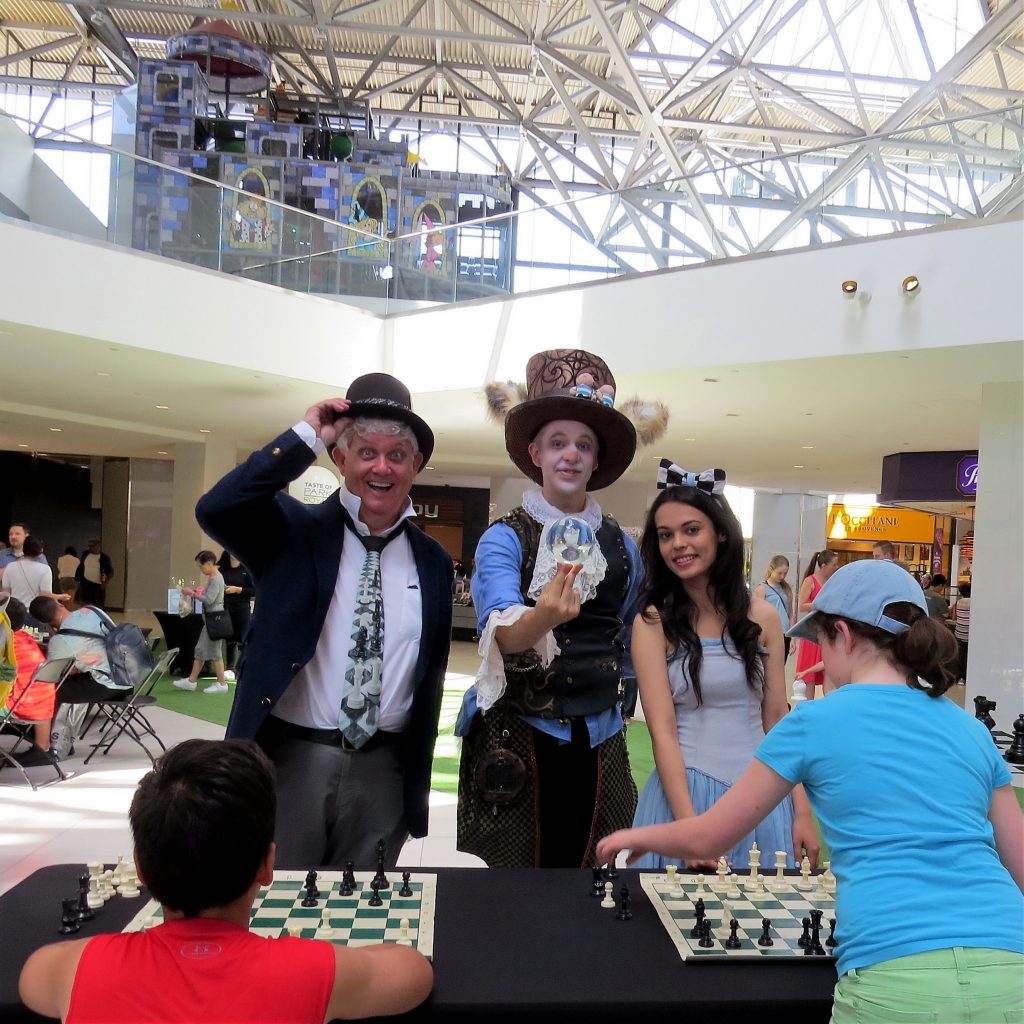 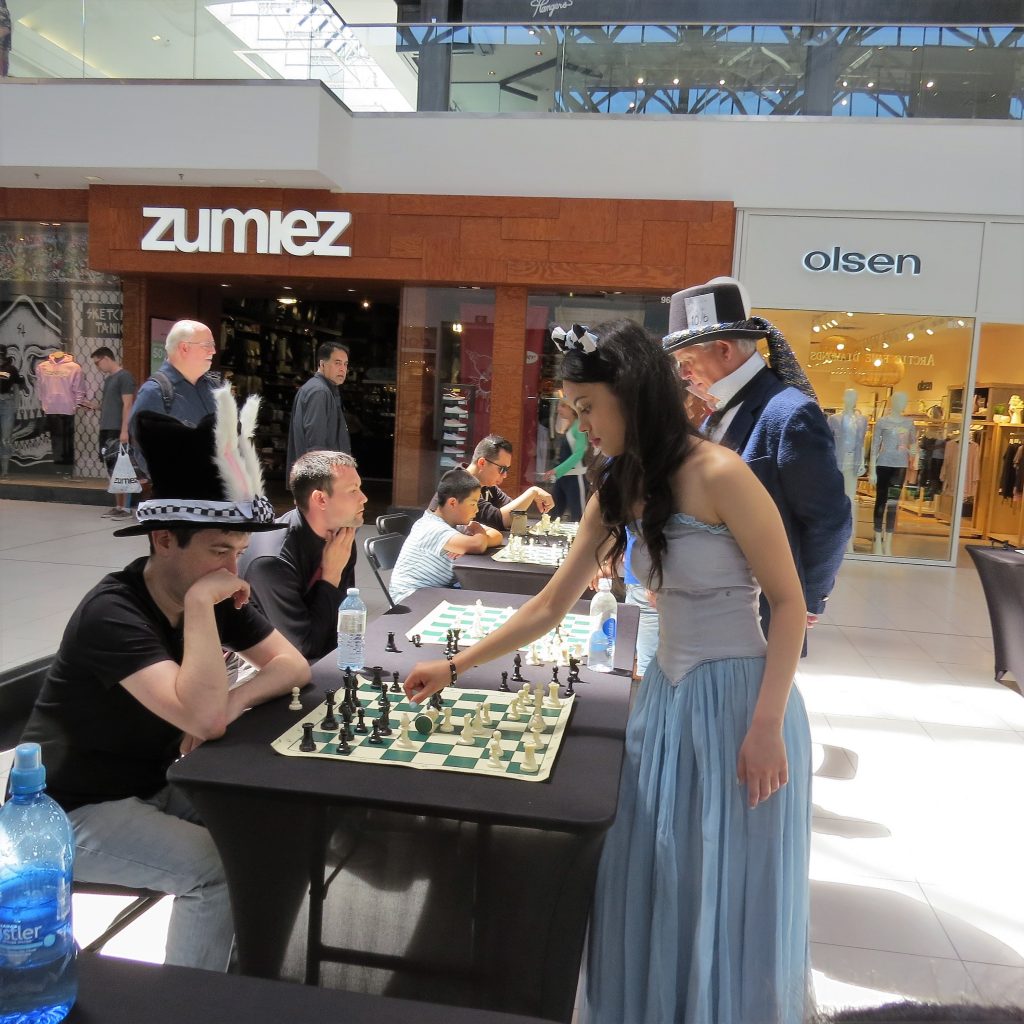 My Dad a chess player 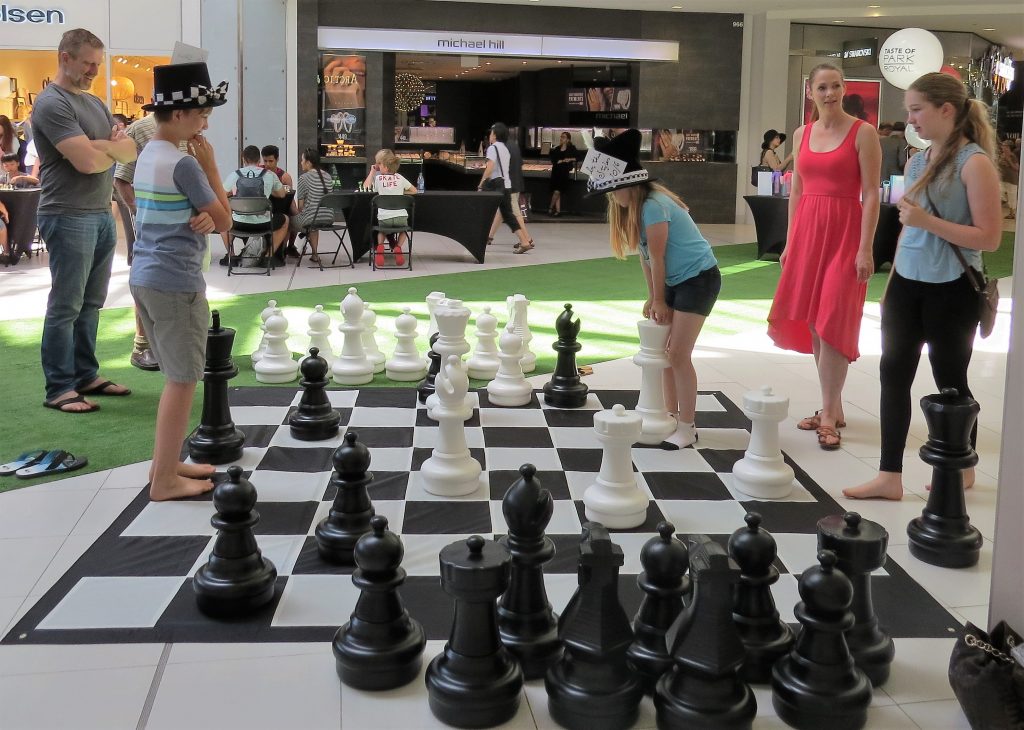 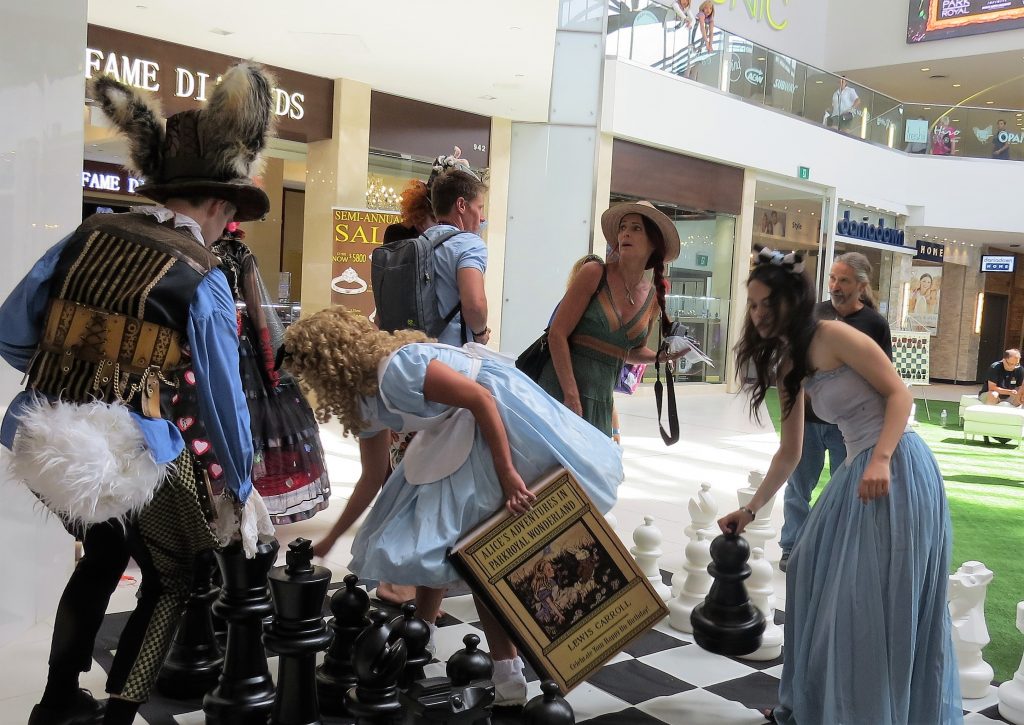 Check out the name on the Alice book ….”Park Royal Wonderland” 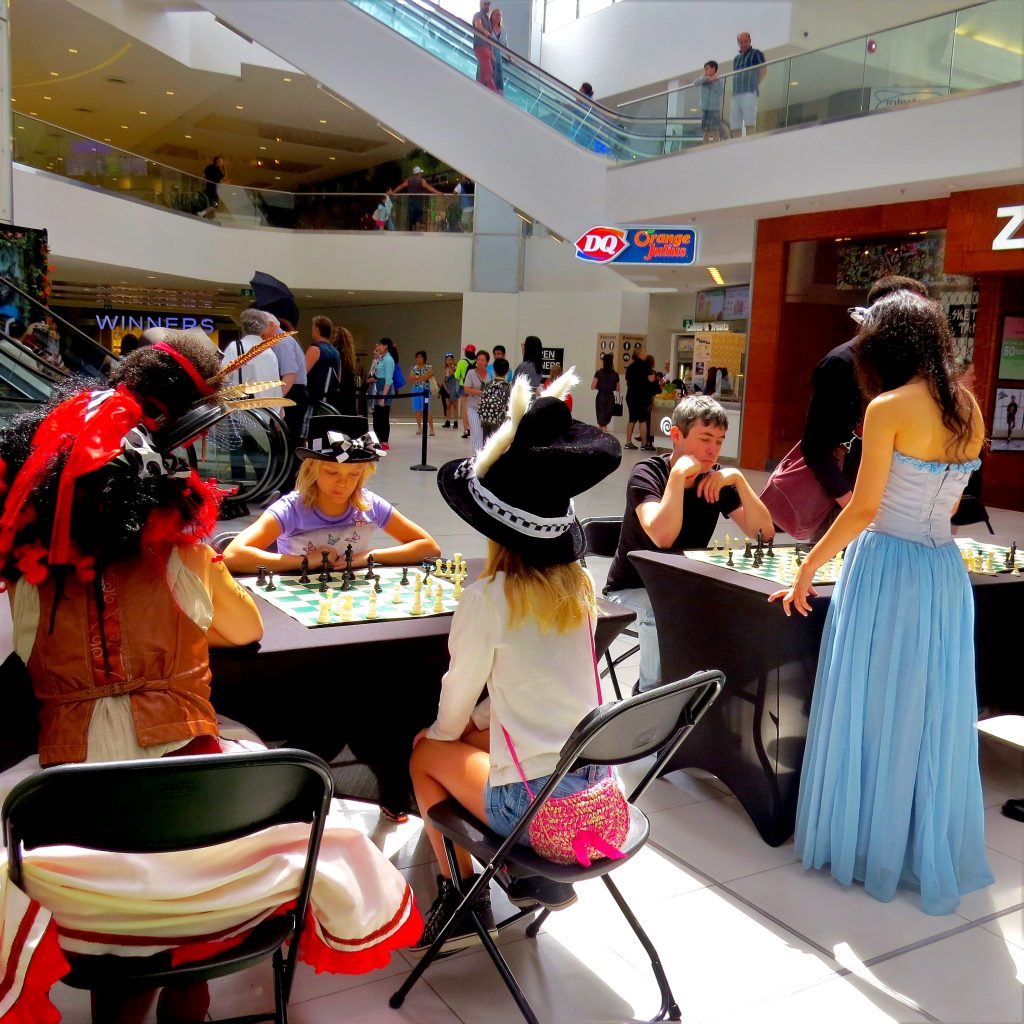 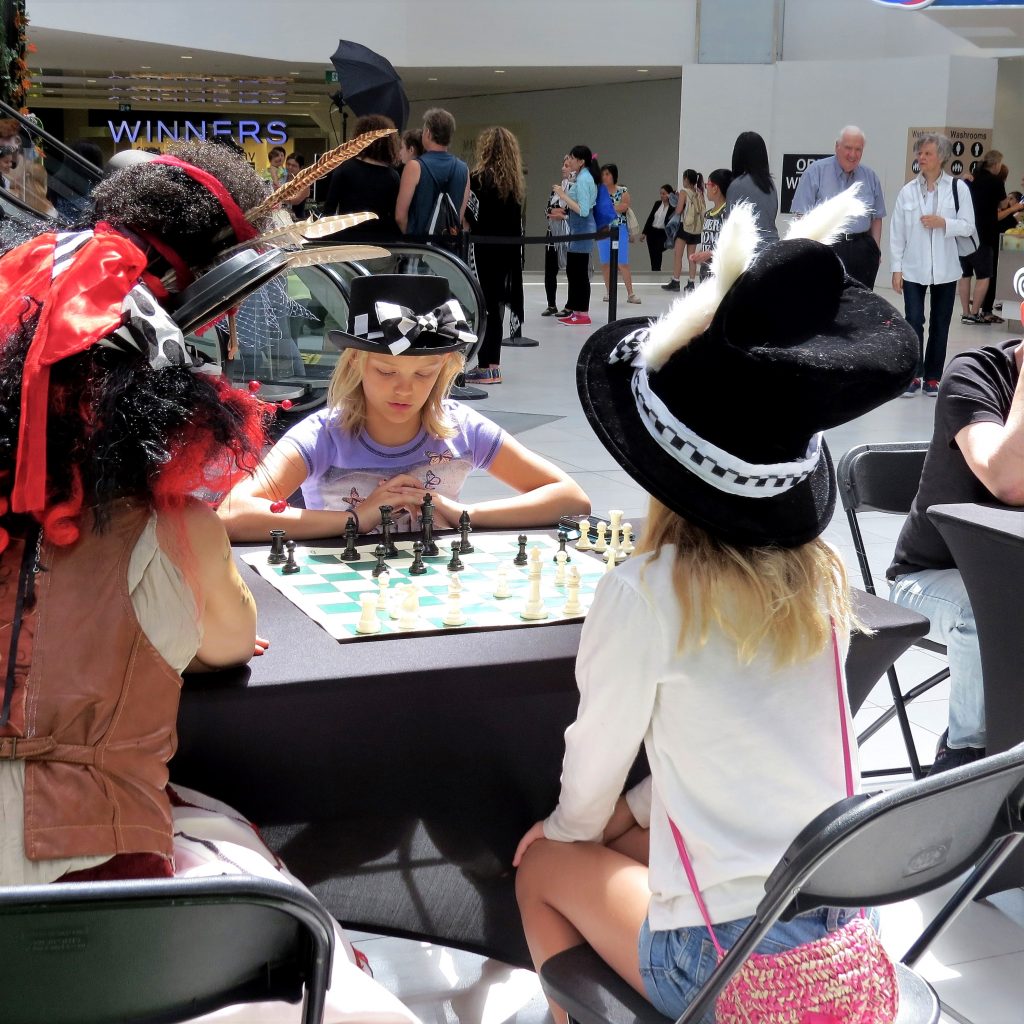 Beautiful Park Royal Shopping Centre/Ambleside is a short walk for me. Having a part time job there is great and dropping by for a game of chess. I’ve been eagerly awaiting the chance to share this news of the magnificent chess space that Park Royal Management has so generously provided for us.

We are all clearly grateful to have this space. Park Royal had the first permanent chess area in a shopping centre in Canada. We had chess from 1984-2006 with inlaid chess tables… and now this beautiful space 2017.

Seriously, how cool is this! I feel so honored, and a pic of one of my best chess moments visiting Webster University for the All Girls Tournament, St Louis.

But bigger than this is a girl and women (the women first greatest) recognized here for playing the game of chess. This makes me proud. 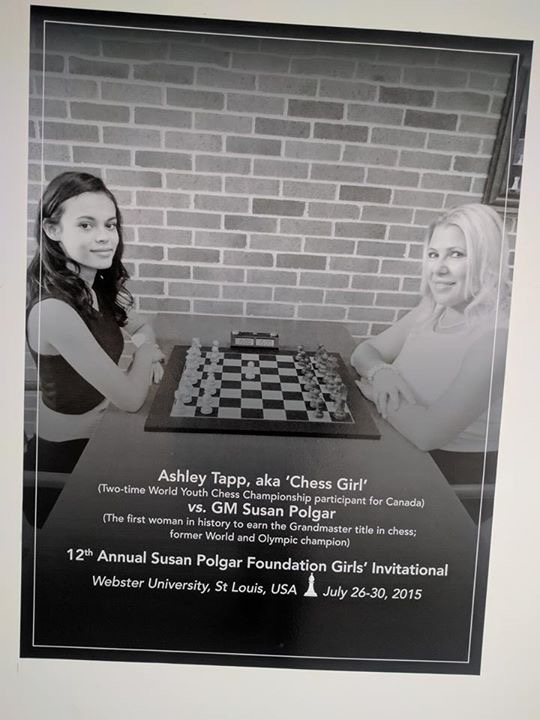 More pics of the players in action in the new area will be added shortly.

THROUGH THE LOOKING GLASS – CHESS EVENT

A new event added to the Annual Come out and challenge me in a simultaneous exhibition at the Park Royal Shopping Centre on July 8. Special guest will be former BC Chess Champion Dan Scoones, a master player who will also play a simul with you.

Be there before 1:00 pm to get a seat, and games begin around 1:15 pm. You can always play if there is an empty seat anytime, so just show up and give it a try. The chess area will remain active through the evening. Beginners welcome, its all for fun.

We will have a teaching corner for new players taught by Pedram Armani, our school chess club leader.

Get a picture taken with the characters from Through The Looking Glass in the photo booth!

We will be in the main center court area on the South Side of Park Royal Shopping Centre.

CLICK THE PIC. TO SEE THE LINE UP OF ACTIVITIES: 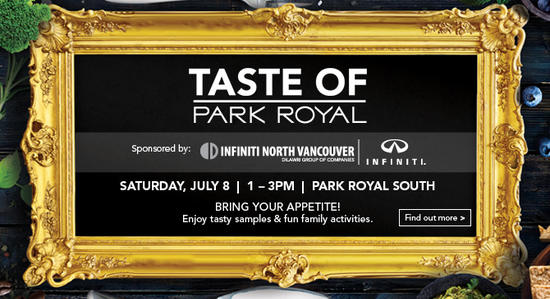 I have been waiting to share this news with you for a few weeks! I’m so happy to have been asked to write for chesskid.com. Firstly because I feel this is my opportunity to share with people around the world just how serious a chess player I am, (naturally how much time I have for chess will always dictate how far I go) but regardless of this, I’m training, getting stronger and enjoying the complexities of this game even more than ever! Also having a platform to continue to encourage girls to play chess remains a goal of mine.

Here is the first article an intro that will be live on chesskid.com Dec 7. But you can still see it here now! Check out my games in the article. (Continue clicking on the moves to see the whole game)

I’ll be writing more soon and hope there is plenty for young children to follow too. 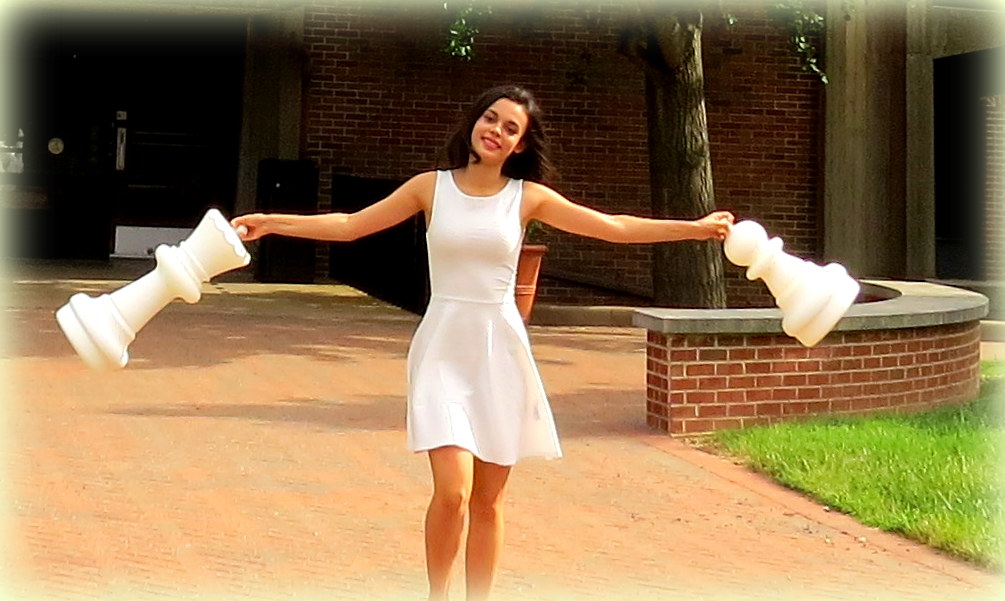 END_OF_DOCUMENT_TOKEN_TO_BE_REPLACED

CHAPTERS BOOK STORE Chess for a Cause