We took a trip to see Philippi just before the Kavala Open Chess touranment. It is 20 mins from Kavala, an easy bus ride. Fascinating journey back into time. 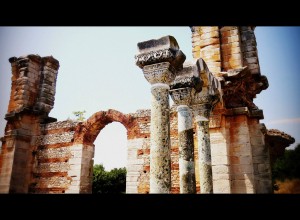 Phillipi was the name of ancient city in North Greece, established by Phillip II in 356 BC. It was very large but nowadays only some parts of it can be seen. The ruins of Philippi are located about 15 km away from the town of Kavala.The archeological excavations began in the summer of 1914 but were interrupted by World War I. They were renewed in 1920 and until 1937 the Greek theatre, the forum, Basilicas A and B, the baths and the walls were excavated. After the Second World War archeologists excavated the bishops quarter and the octagonal church, large private residences, a new basilica near the museum and two others in the necropolis to the east of the city.

SPF Girls Invitational 2015 is Over!

In White Playing Black (rd.4. I won my game against a WCM)